This blog entry was brought to you by Amika S…

We started our seventh day in Israel with a tour of the most significant Christian, Jewish, and Muslim sites in the Old City of Jerusalem. We started at the Al-Aqsa mosque and the Dome of the Rock, the latter of which was unbelievably beautiful, covered in its entirety with detailed mosaics, with an incredible golden dome pointing to the heavens. The Dome of the Mosque is the third most holy site in the Muslim tradition, the place where the Prophet Mohammed ascended to heaven. 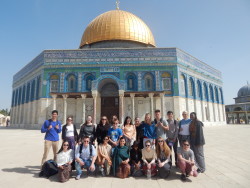 There, in the shade of the Dome of the Rock, we had the opportunity to meet with the Imam of the mosque, where we heard his perspective on the contested history of the site. In Jewish tradition, the area containing the al-Aqsa mosque, known as the Temple Mount, is considered to be the most holy site, as they believe it to be the location of the First and Second Temples. The Imam we met was of the opinion that because the Jews did not lay claim to the Temple Mount for thousands of years, they must not really believe that the temples existed at the site of the Dome of the Rock.

Today, we had two tour guides, one an Israeli Jew and the other a Palestinian Muslim, so every site we visited came with two opposing narratives of the significance and history of it. After visiting the Muslim sites, we made our way to the Church of the Holy Sepulcher by the Via Dolorosa, the path that Jesus walked on his way to his crucifixion. The Old City of Jerusalem is made entirely of smooth, slippery stone, and is comprised of narrow pathways. 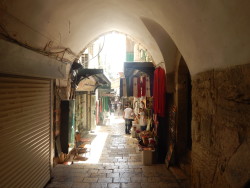 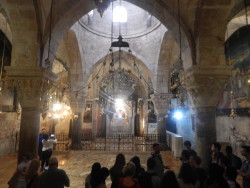 After we finished our tour of the Church of the Holy Sepulcher, we headed over to meet Dr. Salim Munayer, who runs a program called Musalaha, a non-profit organization that facilitates Palestinians and Israelis to build relationships on the individual level, the first step to a larger reconciliation. Musalaha holds summer camps for children, and desert excursions for adults and teens. We had heard from previous speakers that Arabs and Israeli Jews do not generally interact socially, that each group sticks to its own. One of the biggest roadblocks to peace is that each group believes their view to be unequivocally correct, making negotiations and compromise incredibly difficult. Dr. Munayer was optimistic about his work, saying that though their reach is narrow now, the potential is great.

According to Dr. Munayer, many parents send their children to Musalaha camps because of the racism they are exposed to in the schoolyard. Many Israeli and Palestinian children have absorbed the racism around them, and now shout racial slurs on the playground. Politics aside, many parents are disturbed by this, that children are losing humanity.

That evening, we headed to the West Bank, where a lovely Palestinian family hosted us for dinner. Dinner itself was an experience, giant pots of meat and rice were flipped upside down on the trays on the tables. It was unlike anything any of us had seen before. 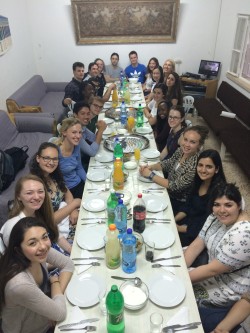 After dinner, we listened and danced to Wast Al Tarik, a band comprised of both Israeli and Palestinian members. Wast Al Tarik translates to “middle of the way,” which is a fitting name as their mission as a group is to bring people on opposing sides of the conflict together over a common interest- music. 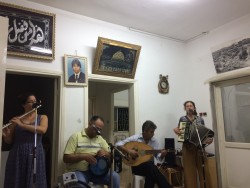