This blog post was brought to you by Melissa M… 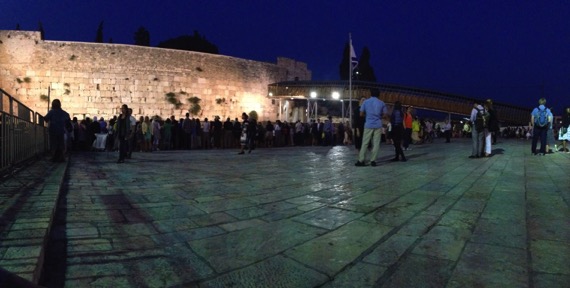 In the Middle East, particularly in Israel, just about every term can be defined a thousand ways. We were able to appreciate the diversity in opinions and definitions in the speakers we heard in the morning. We began the day by listening to two Hebrew University students from dramatically different backgrounds that spoke about their student organization “One on One”. The students, one Israeli and one Palestinian, participate in this organization that facilitates one on one dialogue between Israeli and Palestinian students at the university. Although everything about this initiative was inspiring and fascinating, I found the student’s appreciation for ones own need to feel understood and heard. Feeling understood is a basic human necessity and therefore I found it really amazing that these students provide a forum to do just that. We then heard two speakers who where both activist in the field of defending human rights but had dramatically different understanding of human rights. The first speaker came on behalf of White and Blue. This NGO works to address Human Rights violations in Israel while being part of a right wing political umbrella. In this case the speaker argued that Israeli control over Palestinians living in the West Bank is the most effective way to care for Human Rights. This was an extremely sharp contrast from the third speaker who came on behalf of Bethsalem a Human Rights NGO that has a very polarizing standing in Israel. Bethsalem is very active and critical of the Israeli government the IDF regarding infringements on Palestinian’s rights. Her opinions were usually diametrically opposed from the opinions of Blue and White speaker. I found having speakers who perused the protection of Human Rights but had such different definitions and approaches to them to be particularly insightful and rewarding.

We then went for lunch in the Shook where its impossible not to be amazed by the vitality of the city. In the market it was evident that even “Israeli” can be hard to define as there is as much diversity in people as there is in opinions. The Market is really a melting pot of cultures, ethnicities and traditions. We had a really delicious group lunch where we dicussed the different speakers we had heard in the morning and really were able to dissect the intricacies of protecting Human Rights in a society that faces war and occupation. We were also able to appreciate how different life is for the people of Israel then on our own when we saw solderis younger then ourselves carrying their M16s.

We headed towards the Old City in the afternoon where the magic of Jerusalem was even more evident. The Old City feels both ancient and current at the same time. Hisstory is everywhere and lucklily we had many in our group who where happy to share everything from history to traditions to random facts as we made our way through the Old City. Finally we passed security and entered the Kotel or Western Wall at sunset. Here, as we experienced the beginning of Shabbat in the most scared Jewish place, the fact that there is no single definition of Judaism became even more clear. We could see Orthodox Jewish individuals belonging to different groups and wearing different garmets. We could also see how differently faith can be manifested. This was a particularly moving experience because as we saw mothers, bothers, sisters and friends praying and often crying, the importance of religion became even more heighten.

In the evening we made our way to a Shabbat dinner that was hosted by a really beautiful family. Not only where they gracious enough to invite us into their homes but they really went out of their way to make us feel welcome and comfortable. They went over their favorite Shabbat traditions and made sure to include us as much as possible. The family had a fascinating backstory and like most Israeli’s their background was exceptionally diverse. The food was an amazing mixture of Yemenite and Ashkenazi foods that were really delicious. There was a lot of laughing and singing and I think it was the most appropriate example of what Shabbat should look like.