This blog post was brought to you by Stephanie B…

We started the day by meeting two students from Hebrew University, a premier university in Israel. First we met Ala’a, an Israeli Palestinian student born in Haifa; when he moved to Jerusalem he saw firsthand the divide between the Arabs and Jewish people. The second student was Noam, an Israeli Jewish student who had served in the Israeli military, even becoming an officer, and whose grandfather was the only one in his family to survive the Holocaust. Noam and Ala’a work for a project called One on One. The project was started in Tel Aviv University 3 years ago, and has only been implemented at Hebrew University for 2 years. One on One allows both Jewish and Arab students to come together and have an open conversation. When students show up to the tri-weekly meetings, they are paired up then given a conversation menu to break the ice. The reason for the one on one discussions is because it makes everyone an active participant and it allows for intimacy which can open the door to deeper conversations in the future.

Something to note was how Noam struggled with his words when talking about Israel’s Jeruslaem Day. For Noam, Jerusalem Day was when Israel liberated Palestine. However, for Ala’a it’s the opposite, it marks Israel’s occupation of Palestine. There was a long pause as Noam fumbled. Eventually, our tour guide, Nathan, interrupted by saying, “You can see how he’s trying to find the right words so as not to offend his friend.” In class we’ve talked a lot about whether both Israelis and Palestinians need to reconcile their different narratives of the past in order to achieve peace. I think the dialogues that One on One starts allows both sides to talk about their different narratives and maybe even work towards reconciling some of the differences.

At Hebrew University the Arab population is only 15 to 17 percent. Noam and Ala’a spoke on how the main interaction between Jews and Arabs is during class when they are forced to work together, otherwise the two groups stay separated. It was interesting to hear Ala’a share how his family perceived him as selling out his Palestinian identity by joining One on One. Whereas, Noam did not face such strong backlash from his family and friends. During our discussion, the Im Tirtzu movement on college campuses was brought up. The Im Tirtzu movement is very different from what One on One does. Im Tirtzu is a pro-Israel, ultra-right wing, ultra-Zionist movement. Im Tirtzu translated in English means: “If you will it, it is no dream.” Ala’a and Noam have reclaimed the meaning of Im Tirtzu with their program. They want there to be peace and are using all their will to bring Palestinians and Jews together. 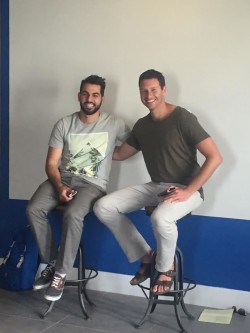 (Picture Left: Ala’a is on the left and Noam on the right)

Next we met a representative from the NGO Blue & White Human Rights Association. The association was established by the Institute for Zionist Strategies (IZS). In politics, human rights are often only associated with the left. However, IZS shows that those with right wing political views can also care about human rights. Blue & White does a lot of work at police checkpoints; they try to change how soldiers deal with Palestinians. Those who are maltreated by soldiers can report to Blue & White, who will take their cases to the authorities. Our guest speaker’s political views were expressed during his talk. He supported coexistence and was against disengagement because he felt it led to more terror attacks. The comment peace leads to more terror was said. It was an interesting viewpoint to hear because not many of us in our group agree with this viewpoint. In talking with my classmates afterwards, we came to the consensus that although politically we didn’t agree with this sentiment, it was nice to see that people on the right side of the political spectrum do care about human rights. They were defying stereotypes.

Our last speaker for the morning was Danya from B’tselem. It is a human rights NGO that operates in Gaza, the West Bank, and East Jerusalem. The organization has field researches located in these areas, and they are tasked with videotaping any altercations between Palestinians and Israeli soldiers. B’tselem has brought to light a lot of injustices committed against Palestinians, leading to many death threats. Recently, a B’tselem field researcher captured on camera, an Israeli soldier shooting a Palestinian man in the head. The Palestinian man had attacked another Israeli soldier and had been subdued before he was killed. The Israeli soldier who shot the Palestinian has been charged with manslaughter and is currently on trial. Danya shared that B’tselem has been targeted by the Israeli government. The government imposed a transparency law on NGOs to see where their money comes from. B’tselem isn’t bothered by the consent death threats and acts of intimidation – they are hated because they are effective. They won’t stop till there is a strong human rights culture in Israel.

As we walked towards the Old City of Jerusalem, the sirens rang out, signaling the start of Shabbat. We were headed to the Western Wall, one of the holiest places for Jews to pray. After walking through the narrow streets of the Old City, I was absolutely amazed when arriving upon the Wall. The prayer sections were split between men and women. In both sections, there were large circles of people dancing and singing. Walking into the women’s section, I saw women walking back from the Wall with tears streaming down their faces. Above, birds circled the sky. Being able to see the unity displayed and fervor with which the people prayed overwhelmed me with such emotion. How could you not feel for a people that have been through so much?

After visiting the Western Wall, we next went to a Shabbat dinner with a modern Orthodox Jewish family, the home of Michelle and Nati. We started by singing the song Shalom Aleichem, Welcome my Friends. Then Eishet Chayil, A Woman of Valor, was sang, Nati got to serenade his wife Michelle. Then, a blessing was recited over the wine which was passed around and we took sips. Finally, before eating, challah, braided bread, was broken and dipped in salt. Michelle and Nati have hosted many guests from all over the world in their home. Michelle and Nati gifted us with a book called Shabbat of a Lifetime. Which includes a recipe for challah that I can’t wait to try! It was an amazing night filled with lots of food, dinner was a five course meal, and lots of laughter. I didn’t want it to end. 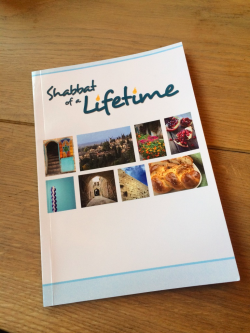 This was our most eventful day so far since arriving. I got to experience my first Shabbat, visit the Old City of Jerusalem and the Western Wall, and listen to many perspectives on the conflict. The phrase Im Tirtzu stuck with me through out the day. Although, it has a negative connotation, it can also be positive. There are many people working towards peace and I want to believe it is possible. If we will it, then surely peace is no dream.

(Picture Right:Shabbat of a Lifetime, the book given to us by Michelle and Nati)