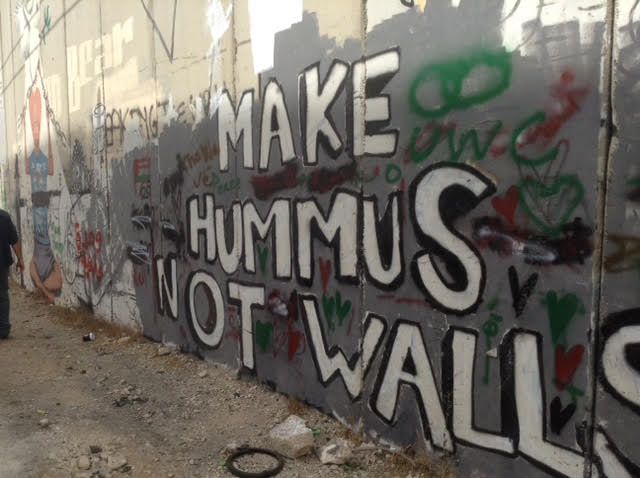 This blog post comes from traveler Susan Goodwillie Stedman (former St. Mark’s Parishioner who joined us from Maine for the 2015 Pilgrimage in Israel/Palestine/Jordan. Her late husband, Bruce Stedman, had been an assistant to Count Bernadotte, the UN Negotiator in Jerusalem in 1947-48 and who was assassinated by the Israeli Stern Gang). She emailed the following to friends and family during her trip…

I write to you from the shore of the Dead Sea, not far from Amman, Jordan, where Bruce tried hard to create a way toward peace after the creation of Israel, in the heart of Palestine, in 1948.

As you will see below, he’d be even more heartsick now than he was when he was alive, as the situation here has worsened.  I’m grateful to have been able to be part of an amazing journey through Israel and the Occupied West Bank, inspired and led by dear friends who lived and worked there years ago.  They, too, loved Bruce and took me to the very spot where he drove in the jeep behind Count Bernadotte (his boss) when CB was shot by Israeli extremists.

Besides Tom and Karen, we’ve had two marvelous local guides, an Israeli Jew and a Palestinian Christian who are good friends–a rare, lovely experience.  We’ve also heard from many other voices on all sides of the Israeli/Palestinian divide who’ve collectively left us sad, hopeful, confused, despairing, and inspired.

I have taken a zillion photos, many of them, it seems, of walls, which is fitting as The Wall that Israel has constructed to protect itself from the West Bank casts huge shadows over everyone on either side.

Here it is from the Israeli side – 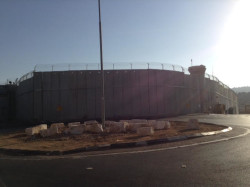 Here it is, after we walked through the check point Palestinians have to endure out and back each day, from the other side, in occupied Bethlehem – 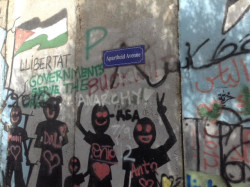 We walked along many miles of artful resistance, but this was one of my favorite panels… 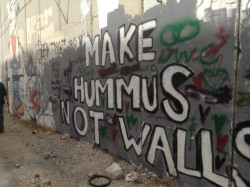 We’ve done our bit, having hummus at every meal!

In contrast, we found most beautiful walls at the Pater Noster church in Jerusalem, where the Lords Prayer is written in more than 200 languages…if only the world could come together as it is on those walls!  Here it is, in Ojibwa! 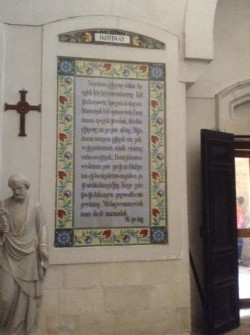 Enough concrete!  I also had several lovely encounters with Palestinian families who are friends of a friend in Maine…here’s one evening, with Nasser and his family in Bethlehem… 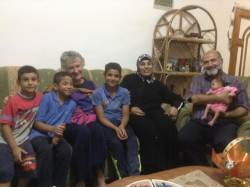 There’s much more, of course….. but I’m happy to return to the tranquility of Maine to sort out all that I’ve seen, heard, tasted, been delighted and saddened by through the stories and people I have met.