Take an in depth look behind the curtain in the birthplace of American politics. Explore the nation’s capital through multiple lenses, with two guides – one conservative and one liberal.

This flagship tour is offered in Washington, D.C. Multiplicity Tours also works with group leaders to build custom tours exploring political history and polarization at destinations of their choice. 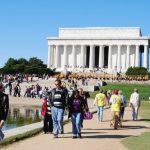 Fill out the form bellow and we will get back to you as soon as possible.